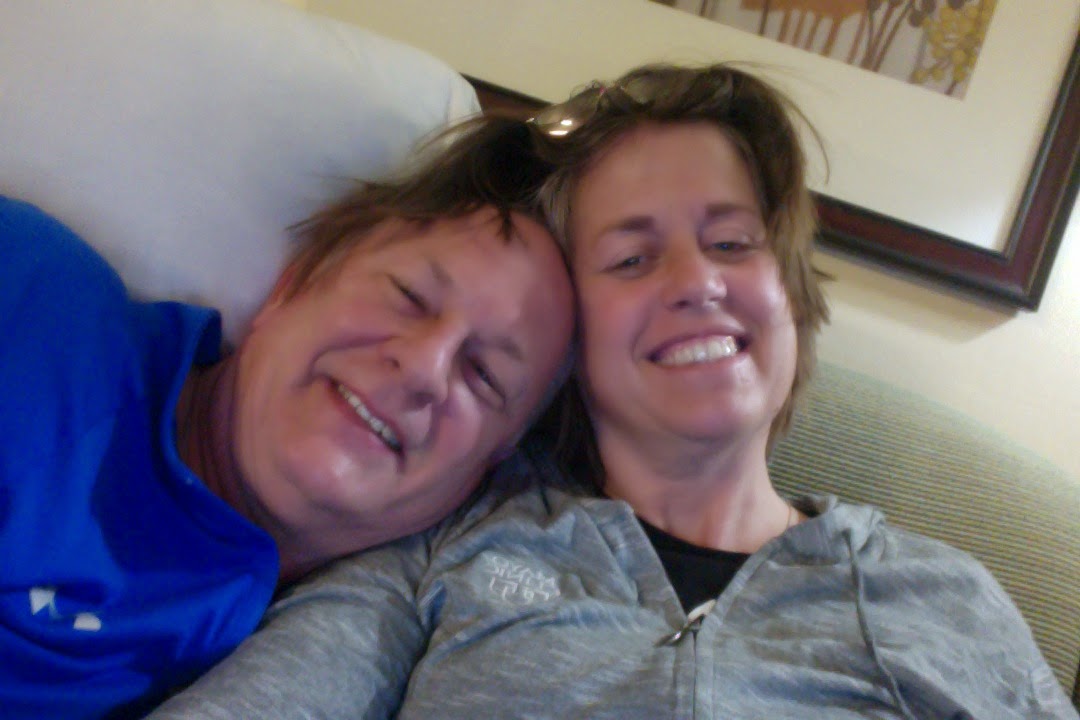 Today was a big day, but thankfully, not quite as busy as yesterday.  With take-out Chinese in our bellies, I fear we will not be awake long.  I think we both may be more tired today, simply because yesterday was so hard and we just didn't recover.  I knew David had crossed over to "exhaustion" when we both started cracking jokes with the cardiovascular office receptionist. I ALWAYS think I'm funny, but David is slightly more modest: in case you don't know that about him. The receptionist seemed to appreciate our humor as we began to reflect on the fact that there were over 60 Cardiologists and therefore, no way any of them could feel like they were somethin' special.  David speculated that the doctors would face retirement before they ever completed a progressive dinner.  I was sure they would all be fat if they had a mandatory progressive dinner and would therefore all die of heart attacks.

Don't judge.  We are exhausted. I honestly had no idea how we were going to get out of the hotel room.  Thanks to my great motivating friends, I gathered a bit of courage and headed out the door for yet another round of blood tests.  This time, they drew blood to do the genetic test for Ehlers Danlos Type IV (Vascular Type).  The results for that test will not return for 4-6 weeks and based on what I learned today, I will apparently learn of the outcome via the Mayo Clinic online medical records app.  This has been really great to have, especially since my appointments seem to change throughout each day, but I'm pretty sure I'm not too excited about hearing the results of that test in this manner.  Since it's impossible to see the doctor face to face (I actually don't like that one...so that's good), I guess getting the news over the internet is the next best option? I suppose there is no good way to get that news if it reveals that I have Type IV.  I'll leave it to you to google Ehlers Danlos Type IV, because it's pretty darn depressing to consider, much less write about.  Let's just leave it at: I don't want to have it - at all.

After the vampires were done with me (she was a very nice one today), I headed to do a "visual evoked potential" exam.  Here, they glued electrodes to my scalp and ear in 5 different places. Ryan, the examiner, stated that he was testing my central nervous system and since the nerves in the eye were the closest to the brain, they were therefore "first" in line regarding communication with the brain. They were testing how my eyes took images and flipped them from upside down, to right side up.  Did you know that your eyes initially see images upside down? Your brain then takes the images and flips them around so you can interpret what you are seeing in the real world.  David says, every photographer knows this and that cameras actually do this as well.  I didn't know this and I sure didn't like staring at a black dot on a screen with moving black and white lines.  My eyeballs were wailing by the time I was done. I don't know if I "passed" or not, but I imagine I will get those results tomorrow when I see the neuro- ophthalmologist.  Ryan, the examiner, was not a Longhorn fan, so we didn't linger.

We headed to the radiology department in the "Gonda" building.  We were "gonda" eat lunch first, so we enjoyed "Freshens" one more time and dropped by the Chocolate Oasis.  We were gonda eat better today, but we decided white chocolate almond bark was a better plan.  The shoulder X-rays went off without a hitch. I was surprised they didn't make me hang onto a gallon of milk and make my shoulder dislocate, in order to show the best view of my shoulder woes. This was how they determined my shoulders dislocated back when I was 13 years old. I explained this to the radiologist tech and she grimaced and said that was in the "dark ages."  Huh....shocking.

We scrambled out of there and barely made it to the "Rehabilitation Doctor".  No, I had never heard of that kind of doctor before either.  She was pretty great and had actually read all the notes from all the previous doctors before seeing me!  OMG!  She spent over an hour with me just trying to assess what I was capable of, what type of rehab I would need and what other types of devices or assistive technologies would be helpful in my recovery.  She will be the doctor who will help me qualify for a mobility service animal.  I am ready to make that commitment now and since it's likely to be at least a 2 year wait before I get a dog, I will have to go ahead and get moving on that process now.

Last but not least, I picked up my pulmonary function test device that I will sleep with tonight.  The pulmonary function test is simply a finger sensor that is strapped onto my now UNPOLISHED fingernails (yes, I just paid for a manicure 5 days ago) and will measure my oxygen levels and pulse all evening long.  The purpose of this test is to determine if I might have sleep apnea.  Further sleep studies are being considered.

Unfortunately, the schedulers don't seem to recognize that we are paying over 100.00 dollars a night for the hotel and have scheduled more tests and consultations through next Thursday the 19th.  We are trying to have this appointment moved, along with one they set for me in April and one in June.  I like Mayo Clinic just fine and Minnesota is thankfully breaking warm temperature records, but I really don't want to come here three times in one year.  Costa Rica is coming to mind....

My Gram came to mind today too, as we lost our minds at the Cardiologists' desk late this afternoon.  Gram often got "tickled" and began laughing over something so completely mundane that I wondered if she might be sipping sake (That one is for you, Pop).  Frequently, she laughed so long, it became hilarious to watch her so amused with herself that we would also start laughing at her and her failed attempts to stop laughing: and the laughing would continue.  I think they call that "Joy".

Doesn't it just prove that God is the great Director, when we can wait at the cardiologists' desk and find joy?  We laughed so much at each other that it was contagious. They didn't ask us whether or not we had traveled to Africa or been exposed to someone with Ebola....they asked us where we were from and laughed with us about the insanity of narcissism and joy of humility.

John 16:33
"I have told you these things so that in me, you may have peace.  In this world, you will have trouble. But take heart! I have overcome the world."