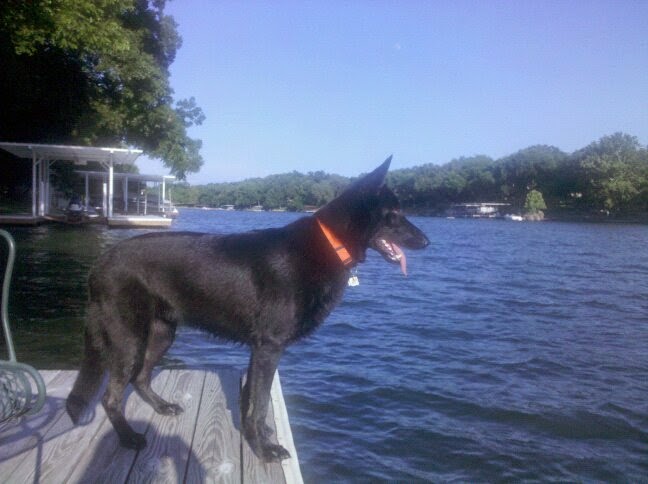 Leslie is a big hit wherever she goes, but she doesn't usually appreciate people approaching me.  That's sort of been a problem.  Thankfully, the people in this hospital-town seem to understand pet boundaries and have only been guilty of nice commentary and admiring her from a distance: sweet.  It's always a surprise when someone recognizes she is a German Shepherd and not a black lab.  I don't even see the resemblance other than the fact that she's black.

This German Shepherd really believes she might be a person.  She pulls me along in my wheelchair when I say, "Take me."  If I'm in pain or upset for any reason, she basically mauls my poor sweetie's face, until he comes to my aid. David's gotten REALLY good at anticipating the assault and blocking her as she dives in for the chomp.  Because of her long history of jumping up and eating people's faces like puppies do (she doesn't seem to realize that it is not quite as cute now) and her tendency to alert David with this same beloved behavior, she has earned the high honor and doggie designation: face chomper.

Today, Leslie escorted me from the hotel room to where my first appointment will be tomorrow at 6:45 a.m. She pulled the chair the entire way (about a 3 or 4 block walk), all underground, in the Mayo Clinic subway level walkway tunnel.  She loved the ramps that afforded her the chance to break into a run.  David just prayed that one of us knew where the brakes were.  After a 20 minutes adventure through the tunnel system, we arrived at our check-in desk, huffing and puffing.  Well, actually, Leslie was huffing and puffing. I was nursing my friction wound from steering with a bare hand on a metal wheel.

The Mayo Clinic thought of just about everything, so we were happy to discover actual cups at the water fountain.  Leslie got the first drink and gulped down two cups in no time.  The water splashed on David's shoes dried rather quickly.

I mention "just about everything", because when we stopped at the Mayo Clinic store to buy a souvenir t-shirt, we could not find a German Shepherd sized shirt, collar, dog bowl, or even a scooby snack.  Damn.

Leslie has passed out for the night.  David is in NCIS la-la land. I am trying very hard to be brave and focus on just this moment in time that is filled with God's love, text messages from friends' galore, and the best support team of all time. Without a doubt, I am blessed beyond my ability to reconcile.

Genesis 2:19 says, "Now the Lord God had formed out of the ground all the wild animals and all the birds in the sky.  He brought them to the man to see what he would name them; and whatever the man called each living creature, that was its name."  And so, it is with God's grace that I hereby Christen all Black German Shepherds as The Face Chomper.